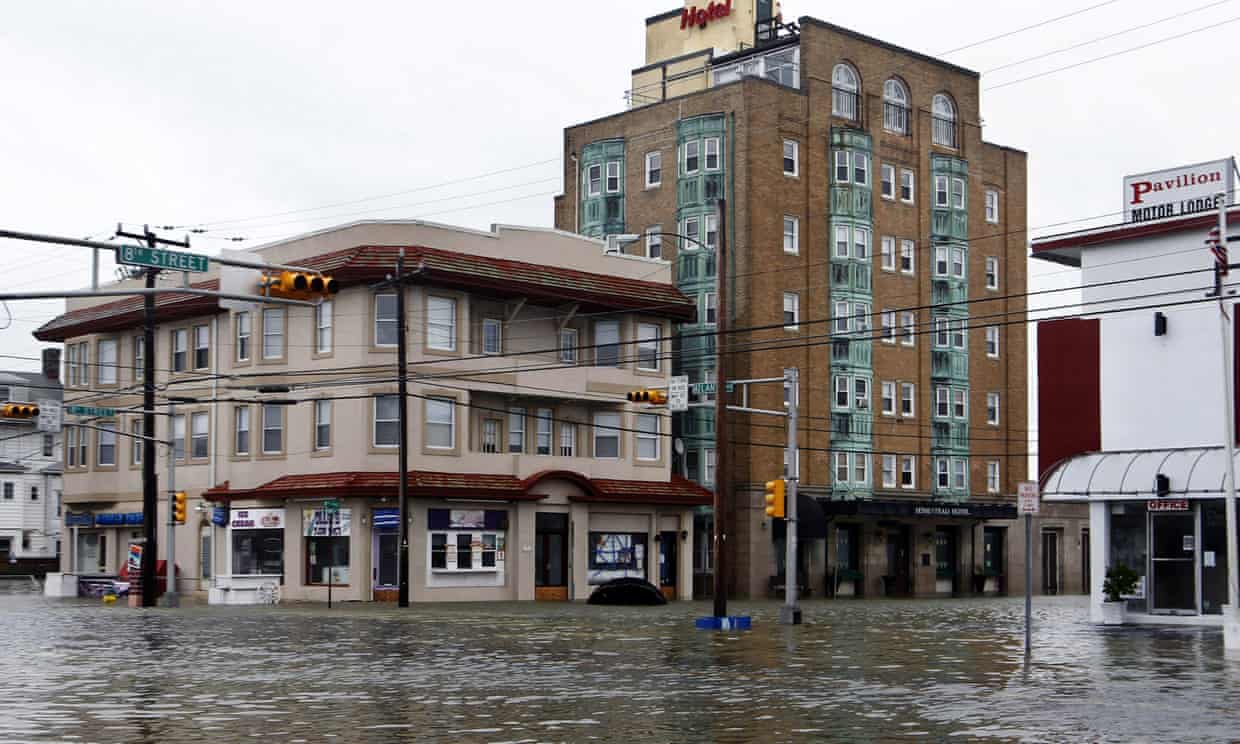 The intersection of 8th Street and Atlantic Avenue is flooded in Ocean City, N.J., after the storm surge from Superstorm Sandy flooded much of the town, aided by rising sea levels. Photograph: Mel Evans/AP

As humans emit heat-trapping gases like carbon dioxide, the planet warms, and over time consequences become more apparent. Some of the consequences we are familiar with – for instance, rising temperatures, melting ice, and rising sea levels. Scientists certainly want to know how much the Earth has changed, but we also want to know how fast the changes will be in the future to know what the next generations will experience.

Sign up to the Green Light email to get the planet's most important stories. Read more...

In order to get a better sense of how oceans are changing everywhere, a complementary technology called satellite altimetry is used. Basically, the satellites shoot a radar beam from space to the ocean surface and watch for the reflection of the beam back to space. From this beam, the satellite can calculate the height of the water. Satellites can emit beams continuously as the satellite passes over open oceans, and can gather data far from shorelines. In doing so, they provide the equivalent of a global network of nearly half a million tide gauges, providing sea surface height information every 10 days for over 25 years.

Just recently, in the Proceedings of the National Academy of Sciences, a paper has been published that collects all the available satellite altimetry data and asks whether the sea level rise is accelerating. The authors of the paper are a well-respected team and include Dr. Steven Nerem from the Cooperative Institute for Research in Environmental Sciences (CIRES) and Dr. John Fasullo, from the National Center for Atmospheric Research.

The authors collected data from four generations of satellites that have carried out this altimetry task. The most recent satellite is called Jason 3, launched in 2016. The satellites generate the data shown below. While in any given year ocean levels may rise a bit or fall a bit, the authors focused on the long-term trend (the white line). They found that the long-term trend is, indeed, accelerating. The rate of acceleration is approximately 0.084 mm per year per year. That may not sound like much, but were this rate of acceleration to continue (a conservative estimate), the authors project that by the end of the century oceans with rise approximately 65 cm (more than two feet). 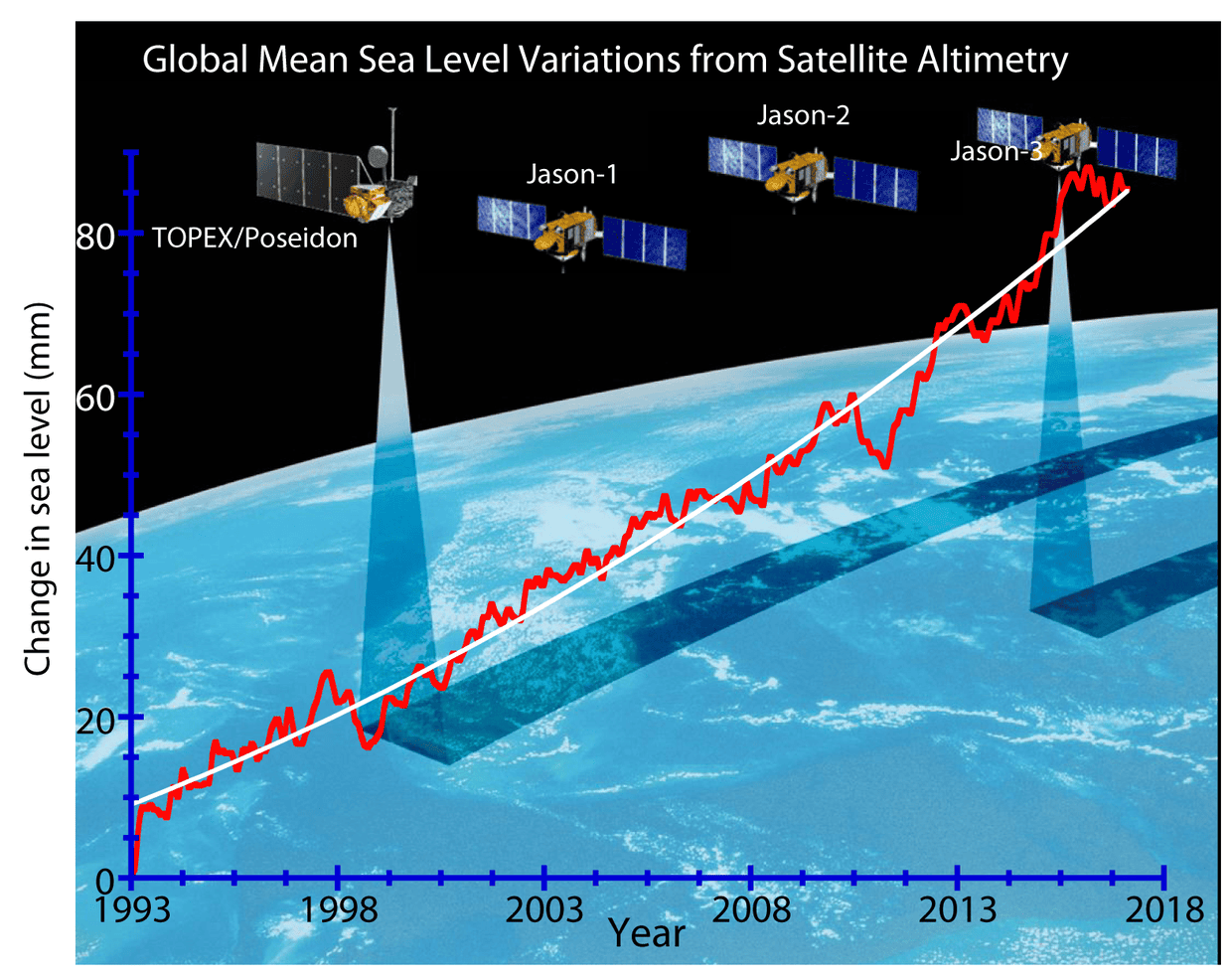 In the study, the authors quantified what was causing the ocean waters to rise. Part of the rise is related to what’s called thermal expansion (warmer water is less dense so it expands). In the past, this was responsible for the majority of sea level rise. More recently, however, melting ice has contributed more and more to sea level rise. As land-based ice melts, the liquid water flows into the oceans and increases the mass of water in the oceans.

Is this acceleration very important? Well the authors answer that question. They calculate that the acceleration will cause more than half of the sea level rise that will occur by the year 2100. Right now, sea levels are rising at a rate of about 3 mm per year. If that rate remained constant until the year 2100 (no acceleration), oceans would be about 25 cm higher than they are today. But a continued acceleration would cause a rise of 65 cm. So, this seemingly small acceleration makes a huge impact.

The authors are careful to note that if anything, their results are conservative. They don’t account for potential catastrophic losses of major ice sheets. Just recently a study appeared that showed an acceleration in land-ice loss from Antarctica. Meanwhile, at the northern tip of our planet, temperatures are soaring. If these trends continue, we may be in store for a rude awakening with a rapid destabilization in a major ice sheet that would have dire implications for coastal communities around the world.

A human being is part of the whole, called by us ‘Universe,’ a part limited in time and space. He experiences himself, his thoughts, and feelings as something separated from the rest—a kind of delusion of his consciousness. This delusion is a prison, restricting us to our personal desires and to affection for a few persons nearest to us. Our task must be to free ourselves from this prison by widening our circle of compassion to embrace all living creatures and the whole of nature in its beauty.Air Jordan XII 12 Shoes