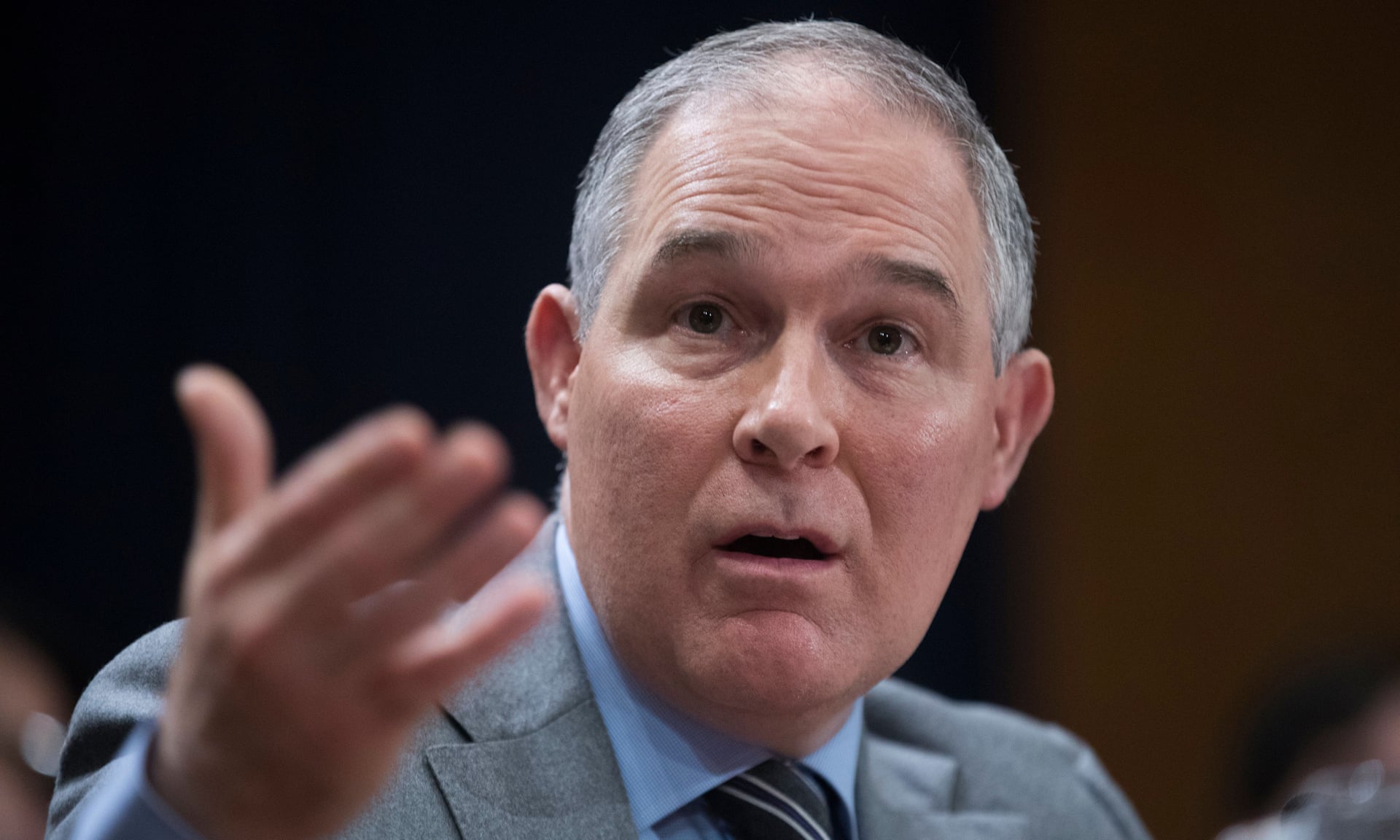 Last week, a Las Vegas news station interviewed Trump’s EPA administrator Scott Pruitt. The interviewer brought up the topic of climate change, and virtually everything Pruitt said in response was wrong, and was often refuted on his own agency’s website, until he started deleting it.

Humans are causing global warming. All of it.

Our activity contributes to the climate changing to a certain degree. Now measuring that with precision, Gerard, I think is more challenging than is let on at times.

Here’s what the EPA website said about that a year ago, before Pruitt got a hold of it as part of the Trump Administration’s systematic deletion of government climate change websites:

Research indicates that natural causes do not explain most observed warming, especially warming since the mid-20th century. Rather, it is extremely likely that human activities have been the dominant cause of that warming. 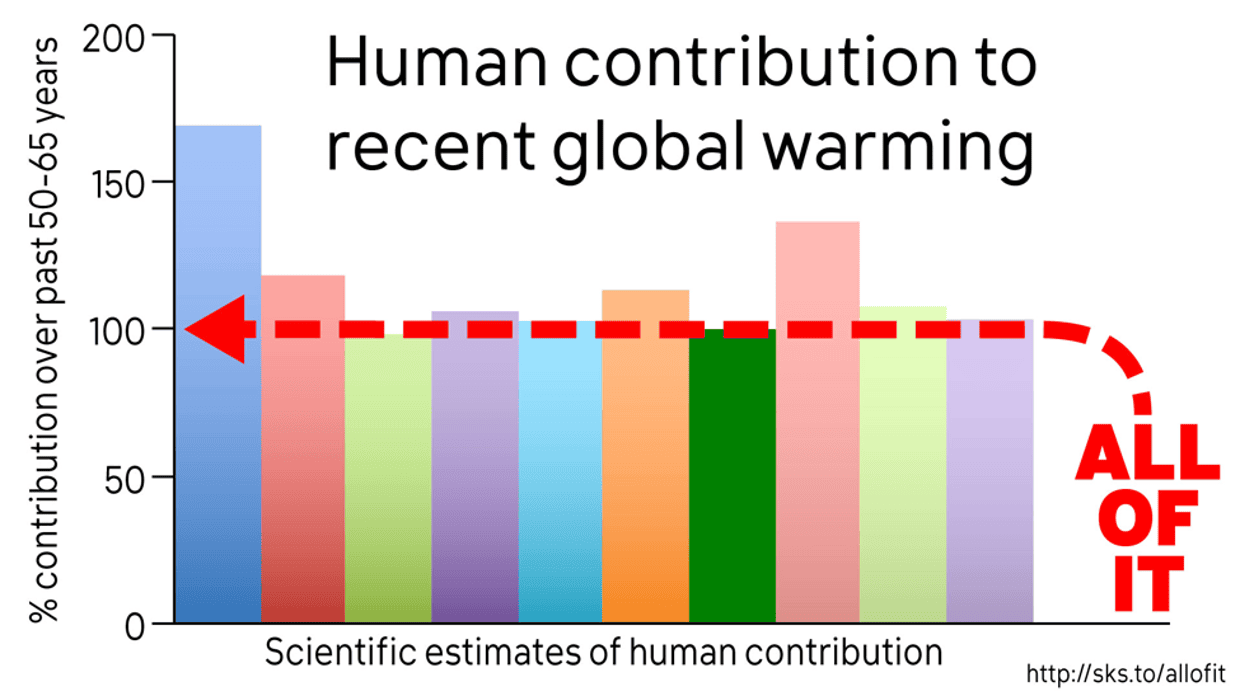 The percentage of human contribution to global warming over the past 50-65 years from various peer-reviewed studies. Illustration: Dana Nuccitelli and John Cook

Similarly, the EPA’s Student’s Guide to Climate Change (which has survived the Trump purge) says:

The Earth is getting warmer because people are adding heat-trapping gases to the atmosphere, mainly by burning fossil fuels … People are causing these changes, which are bigger and happening faster than any climate changes that modern society has ever seen before.

I think there’s assumptions made that because the climate is warming, that that necessarily is a bad thing.

This is not a matter of assumptions – it’s a conclusion supported by a vast body of scientific research. The EPA website likewise tackled this one, until Pruitt got his hands on it:

And the EPA’s Student’s Guide to Climate Change addresses it:

The negative impacts of global climate change will be less severe overall if people reduce the amount of greenhouse gases we’re putting into the atmosphere and worse if we continue producing these gases at current or faster rates.

The EPA’s Climate Change Indicators page likewise lists a number of dangerous climate change consequences. Quite simply, more intense droughts, floods, and hurricanes, and coastal inundation from sea level rise are all very bad outcomes. And even the rosiest analyses conclude that any further global warming will be bad for the economy.

The ideal climate is a stable one

In fact, not only did Pruitt suggest the consequences of global warming won’t be bad, he seemed to think they’ll be good and humans will “flourish.”

Is it an existential threat - is it something that is unsustainable, or what kind of effect or harm is this going to have? We know that humans have most flourished during times of, what, warming trends? … Do we know what the ideal surface temperature should be in the year 2100 or year 2018? It’s fairly arrogant for us to think we know exactly what it should be in 2100.

There is no one perfect temperature for the earth, but there is for us humans, and that’s the temperature we’ve had over the last few thousands of years when we built our civilization, agriculture, economy, and infrastructure. Global average temperature over the last few millennia has fluctuated by a few tenths of degrees; today, it’s risen by nearly 1°C and counting.

Why do we care? Because we are perfectly adapted to our current conditions…

Pruitt’s goal with these answers is clearly to manufacture doubt – to make people think that we needn’t take urgent action to slow global warming because the outcome might not be so bad. But that argument ignores the vast body of scientific evidence that clearly shows the net consequences of continued rapid climate change will fall somewhere in the range of bad to catastrophic. I summarized some of those consequences in this Denial101x lecture:

Toward the end of the interview, Pruitt let slip his allegiance to the fossil fuel industry:

Renewables need to be part of our energy mix, but to think that’s going to be the dominant fuel, or dominant energy source on how we generate electricity, I think is simply fanciful … There was a declared war on coal. The EPA was weaponized against certain sectors of our economy – fossil fuels generally - and that’s not the role of a regulator.

First of all, under the Obama administration, the EPA regulated carbon pollution because it was legally required to do so under the Clean Air Act, according to the Supreme Court. That’s not being ‘weaponized’ against fossil fuels, it’s called enforcing the law to protect Americans’ health.

Second, there is no reason why renewables couldn’t be the dominant fuel in our energy mix. In fact, several states have renewable portfolio standards and goals to make that happen. For example, Hawaii aims for 100% renewable energy by 2045, and California and New York have targets of 50% renewables by 2030. California is even ahead of schedule, on track to meet that goal a decade early, by 2020.

Lies about the Paris agreement

As if his misinformation about climate science and clean energy weren’t bad enough, Pruitt really laid it on thick when asked about the Paris climate accords.

In reality, the Paris agreement couldn’t have been a better deal. America needed only to follow through on existing climate policies to meet its Paris targets, and because the agreement is non-binding, there would be no consequence to missing the targets anyway. Moreover, because China and India are rapidly developing countries, cutting carbon pollution is much more difficult than in a developed country like the US. In fact, China pledged much more aggressive climate action than America in the Paris agreement.

And it should go without saying that claiming the Paris climate agreement is “not about CO2 reduction” is utterly absurd nonsense.

Remind me, what does ‘EPA’ stand for?

It bears remembering that Pruitt heads the Environmental Protection Agency. It’s easy to forget, since he seems to think it’s his job to undo as many regulations protecting the environment and public health as possible, and to maximize fossil fuel industry profits. That’s clear from his constant peddling of climate myths and misinformation. As climate scientist Michael Mann told The Guardian, “There is no consistency at all to their various arguments other than that we should continue to burn fossil fuels.”

Pruitt isn’t in charge of the labor department or the pollution council or Koch Industries. His job is to protect human and environmental health, and it’s hard to imagine anyone doing the job any worse.

The blessings of religion do not require departures from factual reality.