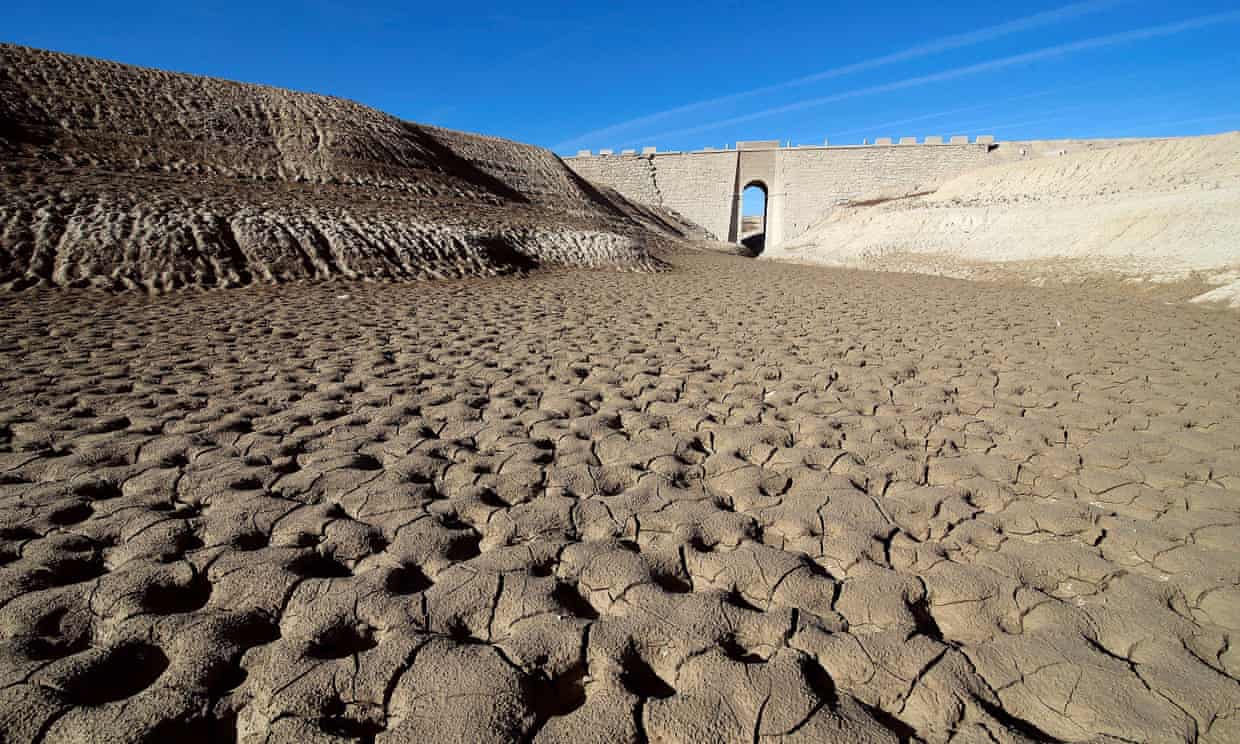 Aridification is a serious threat – as well as leading to droughts and wildfires it can also have an impact on agriculture, water quality, and biodiversity. Photograph: Javier Blasco/EPA

More than 25 percent of the Earth will experience serious drought and desertification by the year 2050 if the attempts made by the Paris climate agreement to curb global warming are not met, according to a new study by the journal Nature Climate Change...

The study, which was published on Monday, claims that if the Earth’s average yearly temperature is raised by 2 degrees Celsius (35.6 degrees Fahrenheit) in the next 32 years, the areas of the world experiencing “aridification,” or drying of the planet, will increase.

“Our research predicts that aridification would emerge over about 20 to 30 percent of the world’s land surface by the time the global mean temperature change reaches 2 degrees Celsius,” said Manoj Joshi, the lead researcher of the study. “But two-thirds of the affected regions could avoid significant aridification if warming is limited to 1.5 degrees Celsius [34.7 degrees Fahrenheit].”

Related: Keep global warming under 1.5C or 'quarter of planet could become arid'...

Su-Jong Jeong, a participant in the study from China’s Southern University of Science and Technology, believes the prevention of aridification lies in reducing greenhouse gas emissions.

“The world has already warmed by 1 degree Celsius [33.8 degrees Fahrenheit],” Jeong said in the study. “But by reducing greenhouse gas emissions into the atmosphere in order to keep global warming under 1.5 degrees Celsius or 2 degrees Celsius could reduce the likelihood of significant aridification emerging in many parts of the world.”

More than 25 percent of the Earth will experience serious drought and desertification by the year 2050 if global warming is not curbed, according to a new study by the journal Nature Climate Change. AFP

The Paris climate accord–an agreement now signed by every country in the world except the United States–aims to do just that.

In June, President Donald Trump announced his plan to withdraw from the Paris pact, an Obama-era agreement. The accord, which Trump said would “undermine our economy” and put the United States “at a permanent disadvantage,” calls on countries to lower greenhouse gas emissions to prevent the average temperature increase from reaching the 2 degrees Celsius mark.

Trump has frequently expressed his disbelief in climate change, despite the overwhelming scientific consensus about its dangers to the planet and humanity.

In December, the president dropped climate change from the list of national security threats. Days later, he tweeted, “In the East, it could be the COLDEST New Year’s Eve on record. Perhaps we could use a little bit of that good old Global Warming that our Country, but not other countries, was going to pay TRILLIONS OF DOLLARS to protect against. Bundle up!”

In the East, it could be the COLDEST New Year’s Eve on record. Perhaps we could use a little bit of that good old Global Warming that our Country, but not other countries, was going to pay TRILLIONS OF DOLLARS to protect against. Bundle up!

The Nature Climate Change study predicts that the regions that will be most affected by an average temperature increase are those located in Central America, Southeast Asia, Southern Europe, Southern Africa and Southern Australia.

Click here for information on the groundbreaking and disruptive new Climageddon book. It is about the global warming emergency and what you can do to help end it!
To View Our: current positions, opinions, agreement or disagreement with this blog article or its facts, click here.