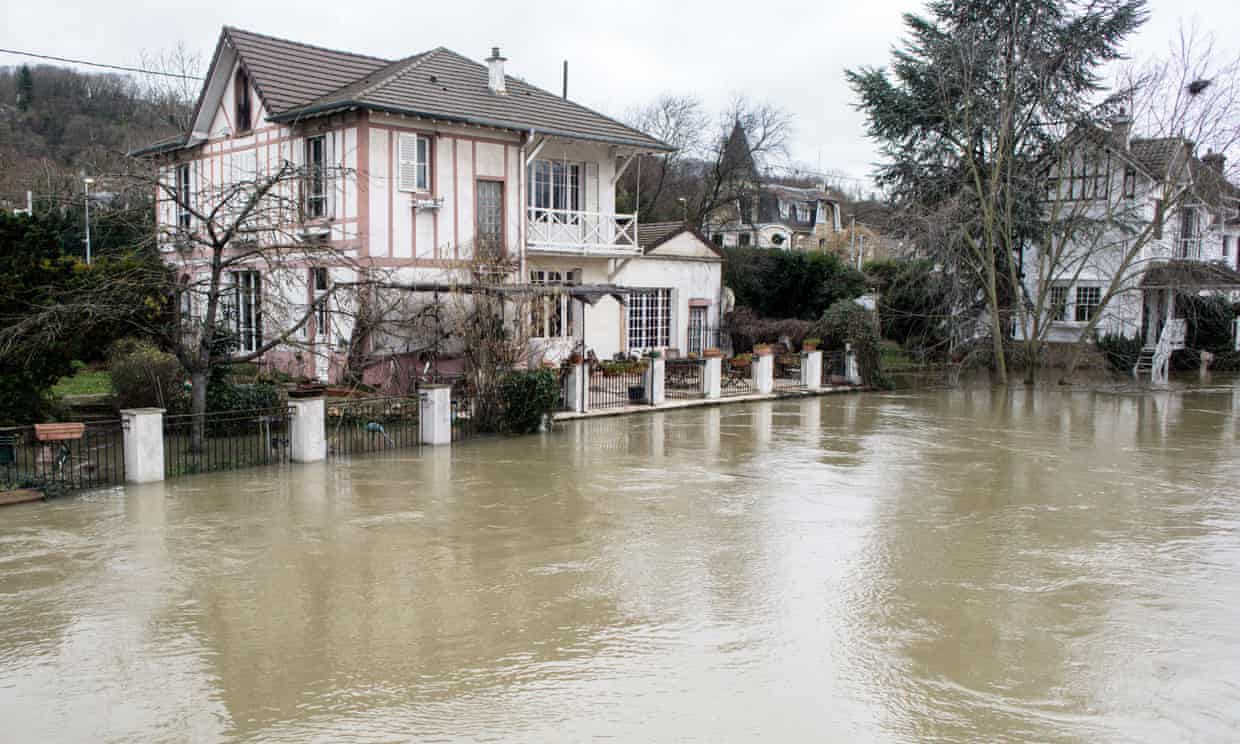 Flood of the Seine in the Yvelines on January 29, 2018 in Villennes sur Seine, France. Photograph: Aurelien Morissard/IP3/Getty Images

A new study finds strong agreement that flood risks in central and western Europe are rising due to global warming...

As humans continue to emit greenhouse gases like carbon dioxide, the world continues to warm. We see that warming everywhere – in the atmosphere, in the oceans, with rising sea levels, and melting ice. But while we know conclusively that humans are causing the warming, an equally important question is, “so what?” Really, we want to know the consequences of warming so that we can make informed decisions about what to do about it. We really have only three choices: mitigate, adapt, or ignore and suffer the consequences.

A very new study was just published that helps answer this question of “so what?” The research was conducted by lead author Lorenzo Alfieri (European Commission – Joint Research Centre, Italy), Richard Betts (University of Exeter and Met Office, UK), and their colleagues.

In the study, the authors used what are called Impact Models to assess the risks of large-scale flooding. They focused their attention on Europe partly because there is a lot of hydrological information there, flood reporting is easily available, and predictions of future climate there are plentiful. The authors compared estimates of flood risk in Europe from three recent case studies; their comparison incorporated changes to future climate, expected damage, and population that will be affected in the flooding zones.

I think of this as a three-part study. First, the authors obtained climate projections for Europe using state-of-the-art climate models. Next, they input the future climate into calculations that quantify flood risk and the impacts. Last, they compared the results that they obtained from their different damage calculation algorithms. The authors looked for areas where the calculations agreed or disagreed with each other. At the end of the day, they wanted to answer two key questions:

1. Is it possible to identify trends that are consistent among the models to help Europe prepare for changes to flood risk?

2. Are there differences in the models and if so, why?

I communicated with Professor Betts who told me:

Our results give the clearest picture yet of climate change increasing the risk of flooding. We did two new sets of model calculations and compared them with a third set from previous work. With all three methods, the result is higher flood risk in Western and Central Europe under a warmer climate, even at just 1.5 degrees C global warming. 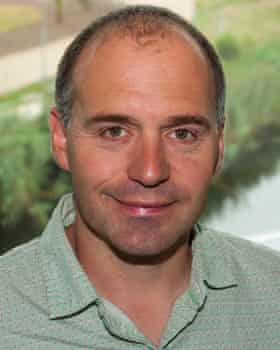 In support to Richard’s statements, the strength of our results comes from the variety of climate projections, methods and models included in this comparison work. The three studies we have considered cover a wide range of variability in projections of flood impacts, thanks to the use of 11 independent climate scenarios, 11 hydrological models, 3 inundation models and 2 impact models. Nevertheless, they all agree on a significant increase in flood risk in most European countries, at all global warming levels. 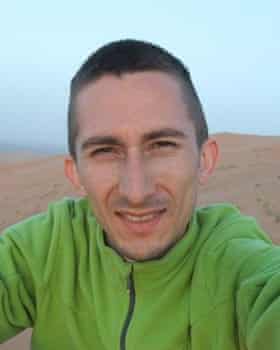 So where did the models agree and where did they disagree? The answer is shown in the figure below from the paper. Red colors signify agreement between the models on an increasing flood risk, and green indicates agreement on a reduction of flood risk. Light colors and white indicate disagreement on future projections. The left-most column corresponds to temperature increases of 1.5°C, the middle column is for 2°C temperature increases, and the right is for 3°C increases. In summary, the models all agree that flood risk is increasing and will increase for Western and Central Europe. 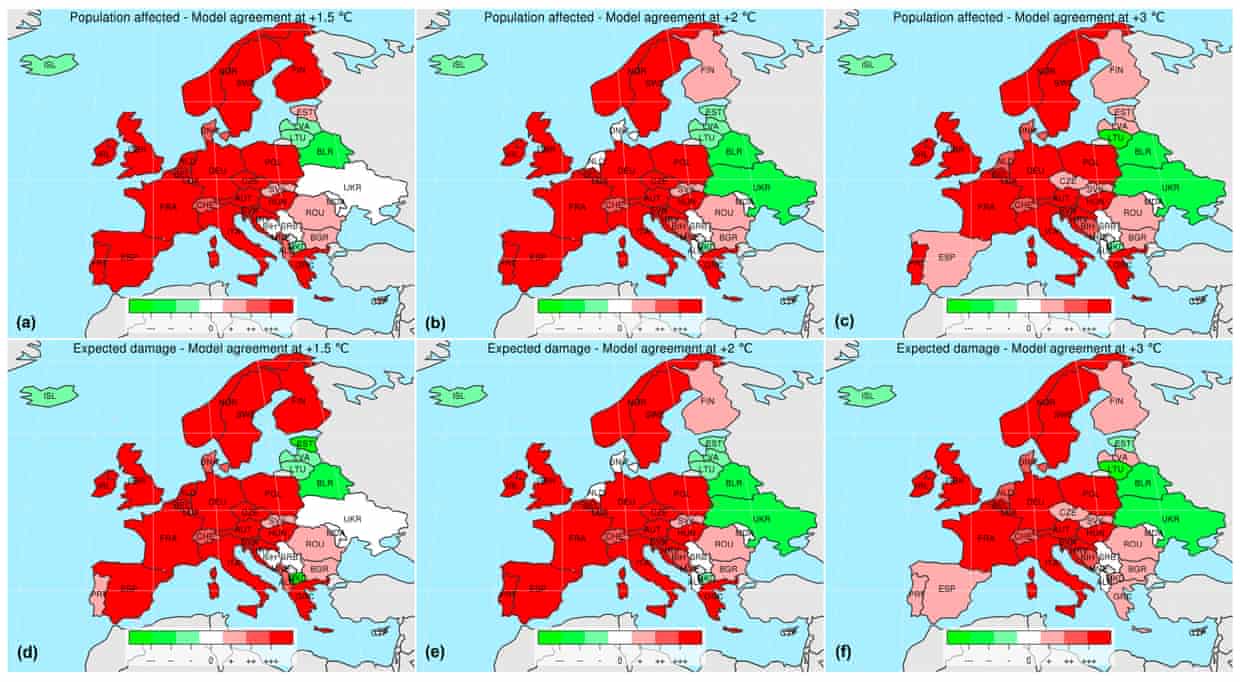 This means the researchers are quite certain regarding increased risks in the central and western parts of Europe but less certain about what will happen in the east. But the authors went a step further; they calculated the expected economic damage from future flooding for the three different temperature increases. They found that regardless of which model was used, there will be significant economic damage (in the range of tens to hundreds of billions of Euros per year) in the warming future. They also showed that the population affected in Europe by future flooding will grow significantly in the future. Roughly estimated, 500,000 to 1 million people are expected to be affected by flooding in the future climate.

What I like about this study is it tries to tackle the problem of quantifying a cost of climate change. We know humans are warming the planet. What we really want to know is what the effect is. Only by comparing costs of action to costs of inaction can we make wise decisions. So far, the research is telling us that it is much wiser to take action now to reduce warming (mitigation) than just ignore greenhouse gases and try to adapt to a harsh future climate.

The more we learn about Earth and life processes, the more we are in awe and the deeper the urge to revere the evolutionary forces that give time a direction and the ecological forces that sustain our planetary home.CD7001-300 Nike W Air VaporMax 2019 CPFM Cactus Plant Flea Market